PFW: Solange Style   Now that Paris Fashion Week has wrapped, I thought it only fitting to highlight a style star – Solange Knowles. Solange has proven to be a style maven over the last few years, and PFW 15 … END_OF_DOCUMENT_TOKEN_TO_BE_REPLACED

Rahul Mishra opened his Fall/Winter 15-16 fashion show at Paris Fashion Week with a flash. With the Interstellar movie soundtrack playing in the background, the models strutted down the runway while the lights were flashing. Luckily this was only an artistic opening that died down when the real show started, finally making it easy to see the details of his collection.

The Indian fashion designer won the International Woolmark Prize at Milan Fashion Week in 2014. All of Mishra’s designs are made out of sustainable materials like wool, with the current Fall/Winter collection being no exception. In an interview with Merino, the designer explained his belief in using sustainable material.

“I have always believed from the beginning of my career about sustainability; that is why sustainable luxury is the world for me. My idea is to create new jobs which help (people) in their own villages – I take work to them rather than calling them to work for me. If villages are stronger you will have a stronger country, a stronger nation, a stronger world. So my entire idea, my entire philosophy, revolves around that.”

With wavy hair and smoky eyes, the models showed off Mishra’s newest creations at Palais de Tokyo. Being my first fashion show, I was happy to see that the ready-to-wear show was actually ready to wear. The color palette went from light to dark; from models sporting nudes and whites to blacks and cobalt blue. 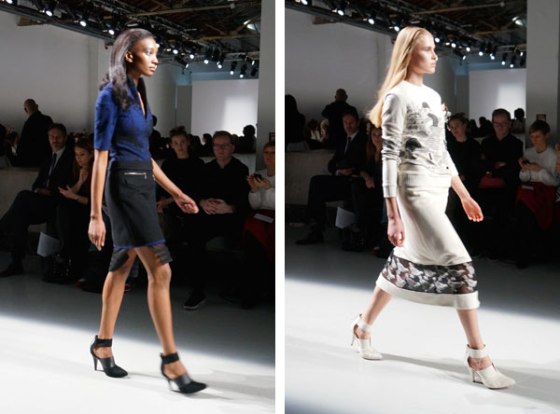 The biggest trend in the collection was the use of sheer materials. Either being the bottom of a skirt, creating a midi-length on a mini skirt, or as a panel for sweaters, jackets and skirts. On the sheer materials there was a reoccurrence of embroidered prints. The prints ranged from organic shapes to birds, flowers and houses, tying the theme of “The Village” together.

A favorite from the collection. Photo: Elise Johnsen

While the whole collection was made of sustainable clothing, looking at it you would never know. With a preference for soft materials in what I wear, the collection was spot on – giving me the impression of comfort and style. The use of neutral colors and soft-looking materials remind me of the quintessential Scandinavian style. 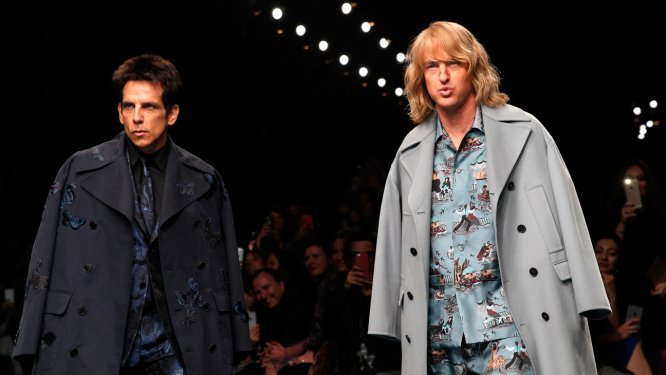 PFW: Zoolander x Valentino Stunt of the season? I think so. At the Valentino Fall 15 Paris show, Ben Stiller and Owen Wilson reprised their beloved Zoolander characters, Derek and Hansel. Their surprise strut down the runway culminated in a fierce face … END_OF_DOCUMENT_TOKEN_TO_BE_REPLACED

Social media is changing the speed of information. Print newspapers and magazines are no longer the first to publish the latest news and events. Instagram has become an easy way to show an insight into the exciting life of celebrities and bloggers. Let’s take a look at 3 different Instagrammers who can give you a unique look into Paris Fashion Week.

1 – With quite an active Instagram account during fashion week, Women’s Wear Daily posts anything from videos of the runway, celebrity spotting and close-ups of the pieces being shown.

2 – While Kim Kardashian and Kendall Jenner are active on their accounts during fashion week, it seems that their mom Kris Jenner is the more active one. Where her daughters focus on more “professional” photos or selfies, Kris posts more in-the-moment shots.

3 – Carin Olsson has in the last years made a big impression on the fashion world. Sharing her photography talent through her blog and on Instagram, she has been hired by big brands and is frequently invited to fashion events. Carin has photographed Dior events for the brand’s Instagram account on multiple occasions.

By Sarah Ayache It was if that enchanting moment in Cinderella when her fairy godmother magically transforms her dress into a shimmering ball gown were coming to life on the runway during the Elie Saab Spring/Summer Haute Couture 2015 show. … END_OF_DOCUMENT_TOKEN_TO_BE_REPLACED

Everyone has their own preferences, like never wearing white socks or putting extra sugar in their latte. Sometimes, there is too much, other times there is not enough.

Either if the glass if half full or half empty, one stylistic debate keeps shifting me to one side and back again.

At the cusp of 2015, Pharrell has shown us that he is still attempting a style take over with Chanel’s ‘CC the World’ campaign with Cara Delevingne, Comme des Garçons ‘Girl’ perfume, and a second run with Adidas’s iconic Stan Smith shoe after his explosive popularity with Daft Punk in 2013.

The argument really goes both ways: have the fashion collaborations gone a little too far, or is he still in the game ?

Looking back to 2013 with Daft Punk’s ‘Get Lucky’, where the song dominated every global radio station, popularity chart, and club, is where his new-age comeback was born. Immediately bouncing off of this, we saw collaborations at the end of 2013 with artist Takashi Murakami during Art Basel at Silencio, a Paris based club that hosted a pop-up event in Miami, that I was excited to attend. This was one of the first times he was able to legally perform ‘Get Lucky’ without the direct presence of Daft Punk, and he was also in the presence of his Japanese artistic collaborator Takashi Murakami, which introduced art and fashion into the ‘new’ scene.

Soon after, Adidas’s iconic shoe line, Stan Smith, was relaunching a campaign and suggested a limited edition designed by Pharrell. These were sold at Colette in Paris and in special boutiques, and were hand painted by the artist. A second campaign has recently been launched in early 2015 by Adidas and Pharrell, which is focused on a uniform pattern of polka dots (a design not similar to artist Kusama, recently featured by Louis Vuitton in 2013).

From phones, clothes, shoes, and contemporary art, there is even a collaboration with macaroon
company Ladurée in Paris, which was featured during ‘Pharrell’ week at Colette in 2014, when the ‘Girl’ perfume by Comme des Garçons was released in avant-premiere, and he designed the window displays on rue Saint Honoré in the Paris 1st district.

Too much? Planed move? Or strategic way to re-enter the market on both a music and fashion level? I think it’s a mix of all.

Pharrell clearly made his way back into the picture, and established his name in the style industry as well. Other artists have not even made it this far. In 2013 Kanye West attempted to have meetings with Louis Vuitton and was denied a meeting (suspected for a potential collaboration pitch).

It seems that his collaborations have passionate value for the artist as well. Clearly he enjoys street wear, a nice phone, and macaroons to snack on.

2015 will be an opportunistic year to see how Pharrell continues. Maybe it is time for a world tour? I know it would smell good, sound great, and look edgy.

There are many perks of living in the fashion capital known as Paris, and twice a year the most exciting event rolls around… Fashion Week! The streets of Paris fill up with fashionable men and women from all over the … END_OF_DOCUMENT_TOKEN_TO_BE_REPLACED

Perhaps the most notable runway accessory this Paris Fashion Week came from designer Rick Owens’ Fall 2015 menswear show, in the form of a specific piece of male anatomy. With his collection, Rick Owens had the honor of gracing the Parisian catwalks … END_OF_DOCUMENT_TOKEN_TO_BE_REPLACED

Paris Fashion Week ended almost two weeks and I am already having withdrawals. The rush of running from one venue to the next, the energy of the crowds, and the excitement that settles as the lights go low before the … END_OF_DOCUMENT_TOKEN_TO_BE_REPLACED