A few weeks ago, I learned the backstory to the fabulous woman in black headdress who floats around the 7th. Diane Pernet, American-born, Paris-based fashion blogger, actually resides in our little neck of the woods.

” She was one of the earliest fashion journalists to embrace the power of the internet, first through a column in online editions of Elle andVogue and then on her site, A SHADED VIEW ON FASHION, which since its inception in 2005 has become a ‘must-read’ in fashion and creative industry circles.”

Designer of her own cult brand in New York for 13 years, Diane Pernet moved to Paris over a decade ago and left the backstage behind to begin a career reporting on fashion. Work for the CBC’s Fashion Files programme lead to an appointment at Joyce magazine where she was fashion editor for five years. At Elle.com, she was reincarnated as “Dr. Diane” dishing out style advice and for VogueParis.com she rated the runways. As one of the world’s most recognisable fashion people, Pernet was asked to make a cameo appearance in Robert Altman’s film, Pret-a-Porter and in Roman Polanski’s The Ninth Gate. Pernet currently contributes as writer and talent scout to several independent fashion and culture magazines around the world. 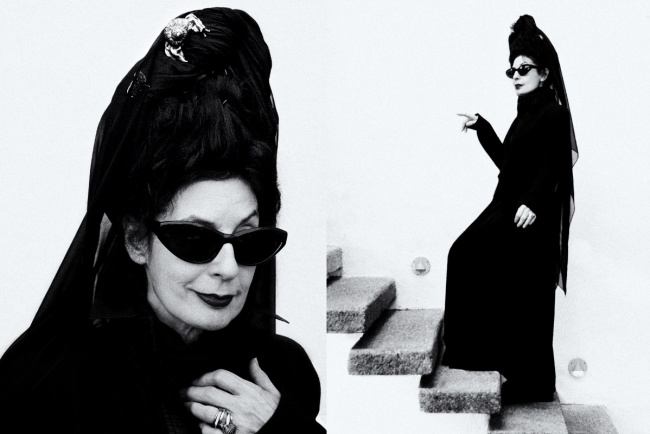 What used to be just the fabulous woman in black, is now an elusive being that I cannot seem to spot! I’ve been dying to find her and arrange a brief interview, but ever since I learned who she was, she became almost this elusive creature. If you manage to see her on the street, stop her and compliment her on that amazing headpiece, I would.