Fondation pour la Creation….just the building itself seems to be the curatorial content so far…

In the past years there has been this buzz around Fashion and Architecture. It started when London’s Somerset House put up an exhibition in 2008 regarding the two. And by making it into an exhibition it became a theme? Both fashion and architecture express ideas of personal, social and cultural identity, reflecting the concerns of the user and the ambition of the age. Their relationship is a symbiotic one, and throughout history clothing and buildings have echoed each other in form and appearance. However the exhibition focuses more specifically on the architecture IN the clothes…and now the cultural focus has shifted towards the “clothing” (brand) IN the building. Here is a link to the catalogue worth taking a look at!  http://www.somersethouse.org.uk/documents/skinbones_exhibition_guide.pdf

While they have much in common, they are also intrinsically different. Both address the human scale, but the proportions, sizes and shapes differ enormously. And while fashion is, by its very nature, ephemeral or ‘of the moment’, architecture traditionally has a more solid, monumental and permanent presence. We have seen various manifestation in New York, LA, Milano, and Venice via Prada’s collaboration’s with Rem Koolhaas for example. We have seen Chanel collaborate with Zaha Hadid on an itinerant bubble piece 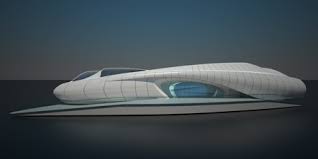 And now it is apparently Paris’ turn… 2014 will supposedly bring us Louis Vuitton’s Fondation pour la Creation, an art museum and cultural center designed by non other than  Prtizker-prize winning starchitect Frank Ghery. This is huge both physically and financially and therefore significantly – $143 million and run independently as a legally separate, nonprofit entity. The location and design of the building have in themselves been controversial, as it is meant to open in the Bois de Boulogne, a publicly owned park and it will be a terribly modern building, slightly cacophonic with Parisian aesthetics as we know them.  It will consist of twelve large glass sails that cover the body of the building, an assembly of white blocks referred to as the “iceberg”, giving it its volume, its lightness and its vitality. Placed in a basin specially created for the purpose, the building is meant to fit comfortably into the natural environment, between woods and garden, while at the same time playing with light and mirror effects.

I am curious to know exactly when it will be opening and how I can get in. And by in I mean a job. No just kidding. But really…what will the opening show be? And what the curatorial fil will be. Why is there so little buzz around this? It should be huge no? Everything on the website other than how the foundation came to be created seems oddly vague. I am seriously considering trekking over to the park itself to investigate if it is really being constructed or if its all just a spoof. I hope to update this post once I have more info…!!