Last week my friend and I decided to go to a spontaneous shopping trip around Paris. We were really convinced that would be a good idea as everything was on sale in Paris, so we thought “What a great opportunity to make some major bargains”. Well that was before we entered KENZO. After taking a look around these really amazing shoes hit my eye and I could not resist but buying them. Well, it was a good bargain I mean 420 € minus 40%…what woman would resist? Apparently not many as my friend went straight to the sales person and got herself the exact same pair. Some would say “OMG that is so high school”, but when its love its love and you just can’t do anything about it. So what is so special about these shoes? Well they are just beautiful and they have a blue sole what makes them to a really smart investment. Wanna take a look? 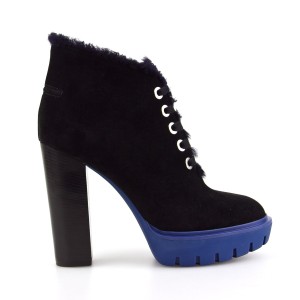 So you have to admit it was a smart thing to buy, but this is also an example of how the whole concept of Sales is working perfectly for the shops as people also get tricked into thinking that they just got a good deal. The thing here in Paris is that you just have those Sales everywhere, whether it be in clothing, jewelry or what ever you can think of. An especially smart tactic is the one of doing the sales in several different stages. First you have the initial state of discounts and then the prices get lower and lower so that people – no lets make it more personal- that I go there several times thinking “Oh wow even cheaper” but then again after going there the 100st time cheap is not really the appropriate word to use…is it?