As I was strolling through my Instagram a few weeks ago, I came across my friend’s picture of one of her Christmas presents. It was a DVD of the documentary “Scatter My Ashes at Bergdorf’s”, with the caption “Anyone into fashion needs to watch this documentary, it’s amazing!” Naturally, as a fashion lover and incoming graduate fashion student, it was placed on my “to do” list.

This weekend, I finally had a chance to watch it. As per the title, the documentary gives an inside look into the world and the fascination of the #1 luxury department store, Bergdorf Goodman. It is located in New York City at the crossroads of 57th and 5th Avenue, on the grounds of the old Vanderbilt mansion. 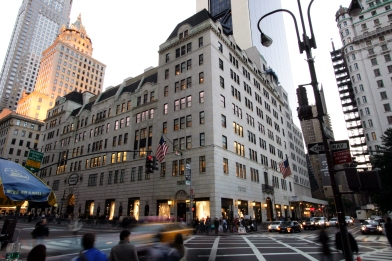 The documentary featured interviews by celebrities, editors, and some of the top names in fashion including Michael Kors, Oscar de la Renta, Diane von Furstenberg, Jason Wu, and Karl Lagerfeld. The film focuses on the allure and fascination of Bergdorf’s.  The department store is a staple in NYC and famous worldwide. It is associated with luxury, fame, and exclusivity.  Even though it is known for its high-end clientele, the documentary stresses that Bergdorf’s also symbolizes aspiration for people all over the world to strive to their full potential to have the ability and the means to shop at Bergdorf’s.  Not only does it represent a dream for consumers, but also for designers. Designers aspire to have their pieces sold at Bergdorf’s, making it is a symbol of “making it”. In this way Bergdorf Goodman represents the “American Dream”. The perfect example is Michael Kors, who was discovered by Bergdorf Goodman’s fashion director, Dawn Mello. She saw him through a window across the street tending to the mannequins; she liked the clothing, and asked him to show his collection to the buyers at Bergdorf’s.

Another aspect of the fascination with Bergdorf’s is their window displays, which are arguably the best in New York City. The audience really gets an inside look at David Hoey (Senior Director, Visual Presentation) and his team’s preparation of the window displays. The windows are a show in itself. They are essentially art installations but the designs are like being in a dream world. Department store window displays in New York City are world famous and as the documentary states a multicultural engagement. I went to the event for the revealing of Bergdorf’s window displays this past November and it was an incredible experience. The amount of detail and extravagance that goes into it is fascinating.

(My picture from the Christmas 2013 window display)

In one of the interviews, Catherine Maladrino says: “Being part of Bergdorf Goodman is part of being in American history”. Bergdorf Goodman was founded in 1899 and has housed the top fashion designers throughout history. Halston used to be the house designer, designing for clients such as Jackie Kennedy Onassis, Elizabeth Taylor, and Barbra Streisand. The workrooms used to be in the store, from couturier to hats.  Smoking and drinking was the norm while shopping. Bergdorf Goodman really was and still is the epitome of glamour.